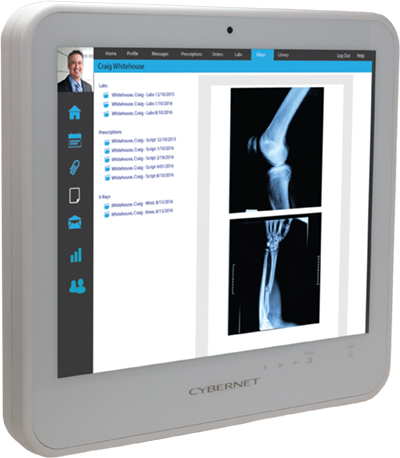 Millinocket Regional Hospital (MRH) is a regional health care facility founded in 1955, and became a critical access hospital in 2002. It serves the healthcare needs of the rural community in Millinocket, Maine. MRH has multiple locations and offers 24/7 emergency care, rehabilitation services, and outpatient physician services. Their mission is excellence in healthcare; their vision is to be the patient’s first choice, and their values include quality, compassion, and dignity.

Millinocket Regional Hospital’s IT staff had deployed a competing all-in-one PC model on carts for use in their medical-surgical inpatient units and emergency room. Unfortunately, the need for frequent upgrades or replacements, combined with the vendor’s prices increasing, set the team on a new path. They’d have to find a competing vendor that could provide not only the equipment they needed (the kind that would be compatible with their current workflow) but at an acceptable cost as well. They also had an extensive electronic medical record system and needed quality, high-speed touchscreen computers to keep up with them. The computers would also need to be able to be mounted on Millinocket’s existing carts, meaning they would have to have a similar footprint and universal mounting options. Their emergency room had its own needs — the staff wanted something with a large display, something that could be seen at a distance if necessary, and enough processing power to not slow down during intense, time-sensitive situations.

The hospital’s IT staff mounted the Cybernet iOne-GX31 all-in-one PC on a medical cart; their nurses then tried it out and provided feedback to the IT team. The nurses really liked the touchscreen: it was the perfect size, it had the right functionality, and they especially loved the privacy filter. MRH then ordered several devices and deployed them in the medical-surgical units and the emergency room. Those devices are still in use today. In 2013, the IT staff chose to buy the CyberMed MP15T medical PCs for the ambulatory surgery units (exam rooms), which were then mounted on medical carts. These are also used by the nurses, who prefer the 15-inch display and also enjoy the wireless capability. One more model was purchased for the Emergency Department – a CyberMed H19, with a 19-inch display. The Emergency Department staff preferred the larger display and the processing power made it easy for them to rapidly switch from one screen view to another. Cybernet PCs extreme reliability also means the new equipment can run 24/7.

Nurses are the primary users of all of the Cybernet all-in-one PCs at Millinocket Regional Hospital, and whether they are using the iOne-GX31s in the ER or the medical-surgical units, or are using the CyberMed MP15Ts in the ambulatory surgery units, the Cybernet PCs have the perfect functionality, a responsive touchscreen, and the processing power to run their EMR software without a hitch. The staff in the Emergency Room also enjoy the functionality of the CyberMed H19, its ability to easily multitask between screens, and the larger display that meets their needs. The IT staff at Millinocket Regional Hospital like the Cybernet all-in-one medical PCs because they have the 24/7 reliability that is required to keep their hospital ready to serve patients no matter the situation or the time of day. They also appreciate the fact that they receive no complaints from the nursing staff regarding training or ease-of-use. Plus the PCs are easy to deploy and maintain, allowing the IT department to spend their energy elsewhere.

Did you know we also have a Cybernet site?

Navigating our Cybernet site will help make sure the information you see on our site is the most accurate to your needs.